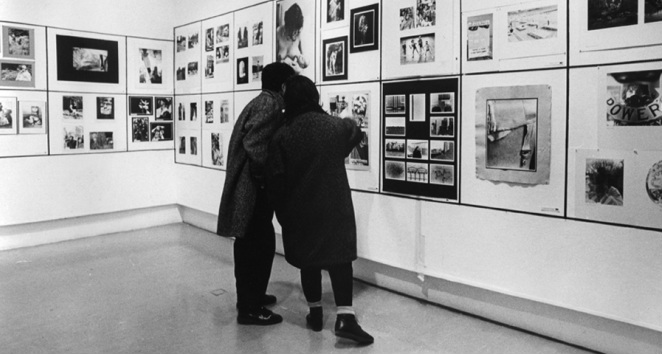 In its early days it was more or less a voluntary activity looking for ways of using photography as part of community activism. They first produced a calendar called Views onWandsworth and exhibitions for the Community Health Council and its energetic secretary Caroline Langridge.

Photographs were also produced for the community newspaper, Pavement. Thereafter the Photo Co-op, in its shortened title, developed its own life, gathered new interests and projects, and developed in a more professional direction.

As the group collected more members, an avenue for potential funding opened up in the form of the Greater London Council. Originating as a small group of amateurs meeting in Gina Glover's and Geof Rayner's living room, the Co-op received its first grant when Gina, Bridget Bishop and Sarah Saunders submitted a funding application to the GLC’s Arts and Recreation Committee in 1983 (at the time headed by Alan Tomkins).

The funding provided a single salary shared among the three women. Nevertheless it was significant, providing materials to begin their work with women’s groups and to help develop the Co-op’s role as a photography resource centre. It was in the same year that the picture library was established and made available to local pressure and community groups and the Co-op began its first major community involvement in the campaign to save South London Women’s Hospital, then at Clapham Common (and tellingly today the building is now a Tesco supermarket.)

The Co-op attempted to stimulate social change through photographic images, raising awareness of social issues such as hospital closures, unemployment, education and transport as well as broader issues including racism and sexual discrimination. What was later to be known as the Thatcherite years of the 1980s can also be remembered as a time of political and social unrest, mounting unemployment and burgeoning inequality. In reflecting oppositional local activism the Photo Co-op attempted to give ordinary people a chance to speak through the medium of photography. The Co-op licensed images to trades unions, newspapers and publications and produced calendars – one about London buses -  and a mobile exhibition on London’s health for the GLC.

As Co-op membership and projects grew, the group soon needed a bigger and more public space than a living room, and its growing library needed daily administration. In 1984 they applied for more substantial funding and this time they managed to achieve two salaries, to be shared among six photographers, as well as sufficient money to move to an office premises in Webbs Road in Battersea, to set up a darkroom and employ a part-time co-ordinator.

The administrator was a critical appointment. Chris Boot’s application was the first to arrive in the post; he was subsequently appointed and threw himself into the job.  Later in 1985 Photo Co-op was able to hire an education worker, the Chilean photographer Luis Bustamante, with the remit to run adult photography courses and link with community groups as well as publish a magazine called Photo.

In 1991 Photo Co-op received funding by the Foundation of Sports and the Arts and the London Arts Board to set up a bigger photograph centre, more focused on darkroom, studio hire and an exhibition space. The name Photofusion was chosen because it represented the many strands of photography the group wanted to bring together. The name change also marked a change from a cooperative, in recognition that not everyone working for the organisation would want the same level of responsibility. At this point Chris Boot moved on - to run the esteemed photography co-operative Magnum - and Julia Martin, one of the existing group, took the managerial helm.

The development of Photofusion is in many ways a story of changing times, the emergence of an image-saturated celebrity culture and many changes in the field of photography, technically, artistically and economically. Across more than three decades, since the founding of Photo Co-op the photography industry became bigger, less dominated by film companies, like Kodak, while often muddy black and white photography gave way to more exacting standards.  It also represented a shift to digital and more recently with internet-based social media, an emphasis on video as well as still photography.

Today a contemporary photography gallery, Photofusion, has been the stepping-stone for some of the most talented photographers of today, with prominent names like Tom Hunter and Simon Roberts. The centre offers educational classes and events, digital and analogue photographic services, a gallery, a picture library – now digitalised but still committed to real people and events - and it also works with communities in South London. It is no longer so centred on documentary and ‘realism’ based, but that too is a sign of changing times. Remarkably some of the original group remain. Julia Martin is still managing director, Gina Glover a board member and Geof Rayner board chair.

This website aims to document the history of the Photo Co-op, but not Photofusion, which is a live organisation with its own website, www.photofusion.org. It has been instigated by one Photo Co-op’s early members, Bridget Bishop (who worked under the name Corry Bevington). The website was made possible with the support and contributions of fellow founders Gina Glover and Sarah Saunders and key players Geof Rayner, Janis Austin, Julia Martin, Chris Boot, Luis Bustamante, Crispin Hughes, Vicki White and Tom Ang.

The archive assembled here is by no means conclusive and might best be seen as a work in progress. If anyone has more photographs, publications or information associated with the Photo Co-op, or if any past members would like to provide an interview, please get in touch so we can feature it on this site.

This website is devised and administered by Clara Cowan.
Powered by